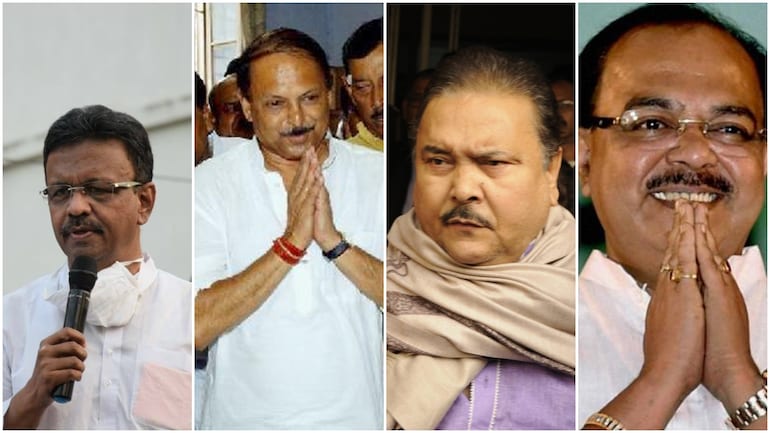 Four years later, out of the twelve Trinamool Congress leaders against whom FIR had been lodged by CBI pertaining to the Narada cash scam, four of them were arrested on Monday at Kolkata.

Of those arrested, two are ministers in the newly formed Mamata Banerjee Cabinet – Subrata Mukherjee and Firhad Hakim. The remaining two accused that have been arrested are ruling Trinamool Congress MLA Madan Mitra, and former Kolkata mayor Sovan Chatterjee.

Following the arrest, chief minister Mamata Banerjee rushed to the CBI’s office at Nizam Palace in south Kolkata and had started a sit-in protest. She had reportedly gone to Hakim’s residence in Chetla before visiting the probe agency’s office.

TMC leader and advocate Anindya Raut told journalists that the Chief Minister asked the CBI to arrest her since the TMC leaders were arrested illegally.

Trinamool supporters staged a protest against the arrests in front of Nizam Palace. The supporters demanded release of the Trinamool leaders. They shouted slogans against BJP and governor Jagdeep Dhankhar. Minister of State for health Chandrima Bhattacharya claimed that this was a political ploy of BJP.

As chaos descended in Kolkata on Monday over the arrest of four Trinamool Congress party members by the CBI in connection with the 2016 Narada sting operation case, West Bengal governor Jagdeep Dhankhar took to Twitter to express alarm and urge the state’s chief minister Mamata Banerjee to follow constitutional norms and rule of law.

On May 9, exactly a week after the TMC emerged victorious as the counting of votes for the assembly elections was held, West Bengal governor Jagdeep Dhankhar gave the nod to prosecute the four accused in the case.

What is the Narada Sting Operation Case?

The case pertains to the ‘Narada tapes’ sting operation shot in 2014 by Narada news portal, purportedly showing TMC leaders accepting bribes on camera. The sting was conducted over a period of two years and was supposed to be published in Tehelka magazine.

Journalist Matthew Samuel, who later quit Tehelka, and launched his own TV channel in West Bengal posed as a businessman planning to invest in West Bengal. The tapes showed 12 TMC ministers, leaders and an IPS officer accepting bribes from representatives of a fictitious company in return for favours.

The sting operation, carried out by Narada News portal CEO Mathew Samuel, was allegedly conducted in 2014 but the videos surfaced just ahead of the 2016 Assembly election in West Bengal. However, despite facing Opposition fire, the TMC won the election with a two-thirds majority.

Senior police officer MH Ahmed Mirza was also seen accepting money. Mirza was the Burdwan superintendent of police when the sting operation was allegedly carried out.

Of the twelve accused TMC leaders, three have joined the saffron camp of BJP namely, Mukul Roy (Former TMC Rajya Sabha MP), Suvendu Adhikari (Former TMC Lok Sabha MP) and Sovan Chatterjee (Former Mayor of Kolkata). The prosecution of BJP MLA from Nandigram, Suvendu Adhikari, has not been sanctioned yet by Lok Sabha Speaker Om Birla, according to a report in NDTV.

There has not been any action against Mukul Roy, now a BJP MLA, either. Sultan Ahmed, another TMC MP, died in 2017. The CBI has, however, asked for permission to prosecute Suvendu Adhikari, Sougata Roy, Kakoli Ghosh Dastidar, Prasun Banerjee and Aparupa Poddar. But, Birla has not granted sanction yet.

The ruling Trinamool Congress initially denied any connection with the sting operation calling it a product of political conspiracy and alleging that the videos were forged. CM Mamata Banerjee called it a smear campaign by the opposition manifesting from vendetta-politics.

Mukherjee was elected the Protem speaker of the West Bengal Legislative Assembly and Hakim is the new Minister of State for Transport & Housing. Sovan Chatterjee, who quit the TMC to join the BJP in the run-up to the recently concluded West Bengal Assembly polls, parted ways with the BJP after the declaration of the candidates’ list.

In a series of tweets, Firhad Hakim had put forth his opinion on this CBI arrest.

The central agency had in January sought sanction from the Governor to prosecute the four leaders in the case. “Governor of West Bengal Jagdeep Dhankar accorded sanction for prosecution in respect of Firhad Hakim, Subrata Mukherjee, Madan Mitra and Sovan Chatterjee, for the reason that all of them at the relevant time of commission of crime were holding the position of ministers in the government of West Bengal,” a statement issued by Raj Bhavan said last week.