Women in every field are showing their competence.

Even society is evolving to accept this change as more and more jobs that have remained male-dominated or male-centric for centuries are becoming open for women.

One such job is that of the military, where more and more posts, reserved for the man are opening up for women.

One such opportunity was grabbed by 26-year-old Captain Abhilasha Barak, who became the first Indian Army’s first woman combat aviator.

Army said that 15 women officers had expressed their desire to join Army Aviation but only two officers were selected after Pilot Aptitude Battery Test and Medical.

Captain Abhilasha Barak graduated at a ceremony held at the Combat Army Aviation Training School in Nashik. D G of Army Aviation, A K Suri, was the chief guest at the event.

Let us learn more about her and her journey in this article. 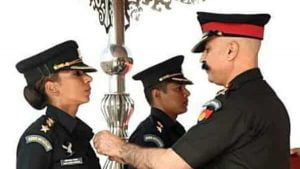 She hails from Haryana and was commissioned into the Army Air Defence Corps in September 2018.

Captain Barak is an alumnus of The Lawrence School, Sanawar. She completed her graduation with B Tech in Electronics and Communication Engineering from Delhi Technological University in 2016 and was placed at Deloitte, USA. But she always had an intense liking for the army.

The 26-year-old is the daughter of Col S Om Singh (Retd) and grew up in military Cantonments across the country.

The captain is multi-talented as she has done multiple professional courses before joining Army Aviation Corps.

Having grown up in a military background joining the forces was a natural career choice for Captain Abhilasha Barak. 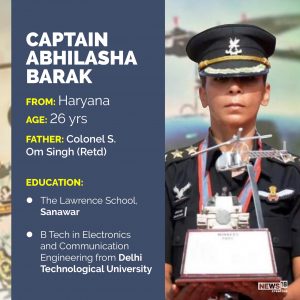 For the captain, as she has always lived in cantonments across the country army was a very natural choice.

This is clear when she says this in an In house released by the army– “While growing up in military Cantonments, and being surrounded by people in uniform, it always seemed like an ordinary affair. I never realised it (that it was different) until our family moved out of the military life, after my father’s retirement in 2011.

She goes on to say “The feeling only grew stronger after seeing my elder brother’s passing out parade at Indian Military Academy in 2013. That was the moment I knew what I wanted to do for the rest of my life,”

These are the major reasons that motivated Captain Abhilasha Barak to join the army.

In the same interview, she talks about how her father in 1987 during operation Meghdoot during patrolling owing to bad weather at Bana Top Post suffered Cerebral Odema and was brought back to Amar Post, from where he was evacuated right in time by the army aviation corps and so she wanted to join this organisation as a mark of appreciation and payback for saving her father’s Life.

The Journey toward this destination was tricky.

In 2018, she was commissioned into the Indian Army from the Officers Training Academy, Chennai.

During her attachment with the Corps of Army Air Defence, she was selected as a Contingent Commander for Presentation of Colours to Army Air Defence by President Ram Nath Kovind.

In the same year, the Captain attained ‘A’ grading in the Army Air Defence Young officers course, 75.70 per cent in Air Traffic Management and Air Laws course and passed the promotional exam, Part B, in her first attempt.

Even though she knew after applying for Army Aviation Corps in the application form, she would be appointed as a ground staff.

Despite this, she knew that the day was not far away when the Indian Army would start inducting women as combat pilots, thus she also mentioned that she had qualified Pilot Aptitude Battery Test and computerised pilot selection system.

She then waited patiently and her belief became reality after two years when the induction of women as pilots was announced, it all came full circle for Captain Barak. 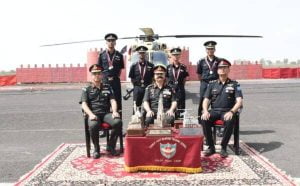 In 2018 she was commissioned into the Indian Army from the Officers Training Academy, Chennai.
Credits:- The Indian Express

As mentioned above only 2 out of the 15 were selected for further rigorous training.

This shows the hardships she had to face before and during her selection to reach the place she is at currently.

The captain has become an inspiration for girls all around the country who want to pick a carrier in the army.

She has become the Gunjan Saxena of our times.

Credits:- The Indian Express, DNA, Indian Times and The Tribune