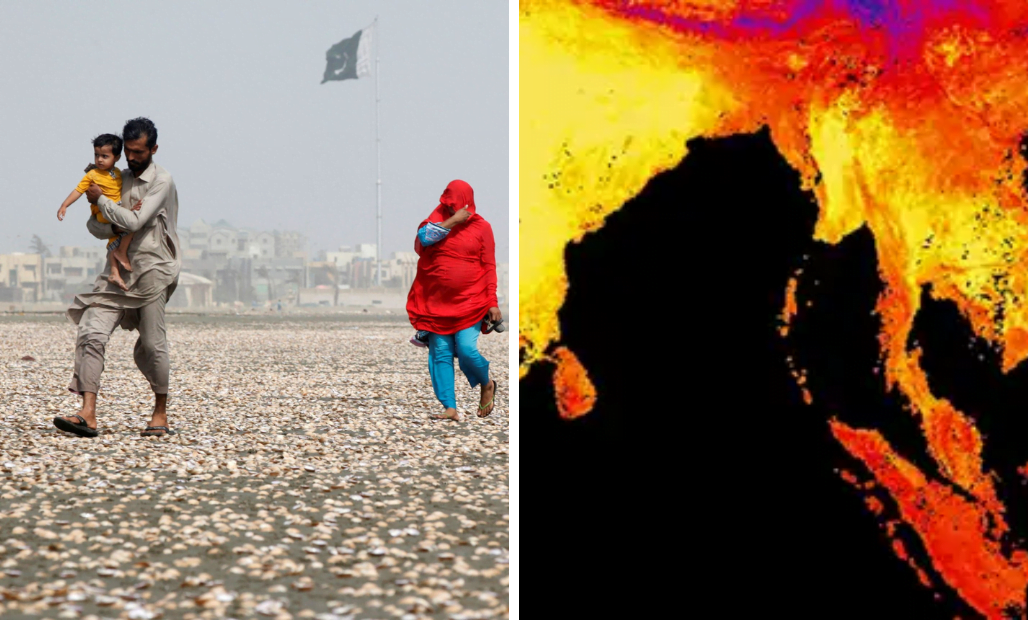 The conditions caused by the heatwaves are expected to continue even after rest but with less potency.

Across South Asia, including India and Pakistan, have been encountering blistering temperatures since early March ranging over 47C in India by the end of April.

A heatwave occurs when there is an approach of high atmospheric pressure in an area and carries on for a couple of days. In such a situation, air from upper levels of the atmosphere is pulled towards the ground, becoming compressed and accumulating only heat and humidity without any trace of precipitation, which only increases the temperature.

The high-pressure system also adverts clouds from entering the region and hinders winds, building them faint-to-nonexistent heating the system even more.

Another key ingredient needed for heatwaves to form is a persistent region of high pressure in the upper atmosphere. High-pressure systems are associated with clearing conditions, but also stable, sinking air. So whenever a high pressure moves over a region, the air in the nearby atmosphere sinks toward the surface. This sinking action acts as a dome cover, sealing off the air underneath the high pressure from the surrounding atmosphere.

Research has noted that the number of heatwave days in India is increasing every decade. According to a research study by IMD scientists, heatwaves have killed more than 17,000 people in 50 years in India.

When the air temperature or humidity rises above the range of comfort, certain problems may come to light. The first effect is on how we feel. Exposure to more heat can cause both health and mental problems which may affect the performance of an individual.

The average human body’s ability to regulate temperature can result in a cascade of illnesses, including heat cramps, heat exhaustion, heatstroke, and hyperthermia.

The effect of a heatwave on agriculture can be direct in the sense that it may cause physical damage to crops, animals, and trees caused by extreme hydro-meteorological events. It can also be indirect like the loss of potential production owing to disturbed flow of goods and services, lost production capacities, and increased costs of production.

Heatwaves have happened in the past but climate change is making heatwaves longer. It is said that global warming will intensify the health effects of heatwaves.

Scientists have also made a deliberate attempt at extreme event attribution to detect if the warming climate has made an extreme event like a heatwave more severe or more likely to happen. They use computer models to replicate weather conditions with or without global warming and other contributing factors. By comparing different schemes, scientists have expressed that global warming is making heat waves worse.

Extreme heat has taken various risks and can increase the types of disasters. Heat can inflame drought, and sometimes in turn create wildfire tragedies. Buildings, roads, and infrastructure absorb heat, leading to a temperature that can be 1 to7 degrees F hotter in urban areas than in outlying areas. Temperature increment across the country poses a threat to everything including mankind, nature, and the economy.

The most fruitful way to keep away the negative impacts of heatwaves is to alleviate climate change by reducing greenhouse gas emissions.

Other precautions we could take are:

It’s better to stay indoors and keep ourselves cool inside the room and stay healthy. Outside activities must be avoided as much as possible for that.

Drink plenty of water and liquid. Drinking water will keep on from hydration and make them stay fresh as always.

4. Protect babies and children from heat.

Babies and children are prone to heat since they have sensitive skin and must be taken extra care of while handling them. It’s better to avoid bringing them into the sunlight.

There’s a need for proper ventilation in houses and built-in air conditioners to keep the heat away from our day-to-day lifestyle.