10 TIMES WHEN THE COMEDIANS ATTEMPT TO GENERATE LAUGHS TURNED INTO FROWNS!! 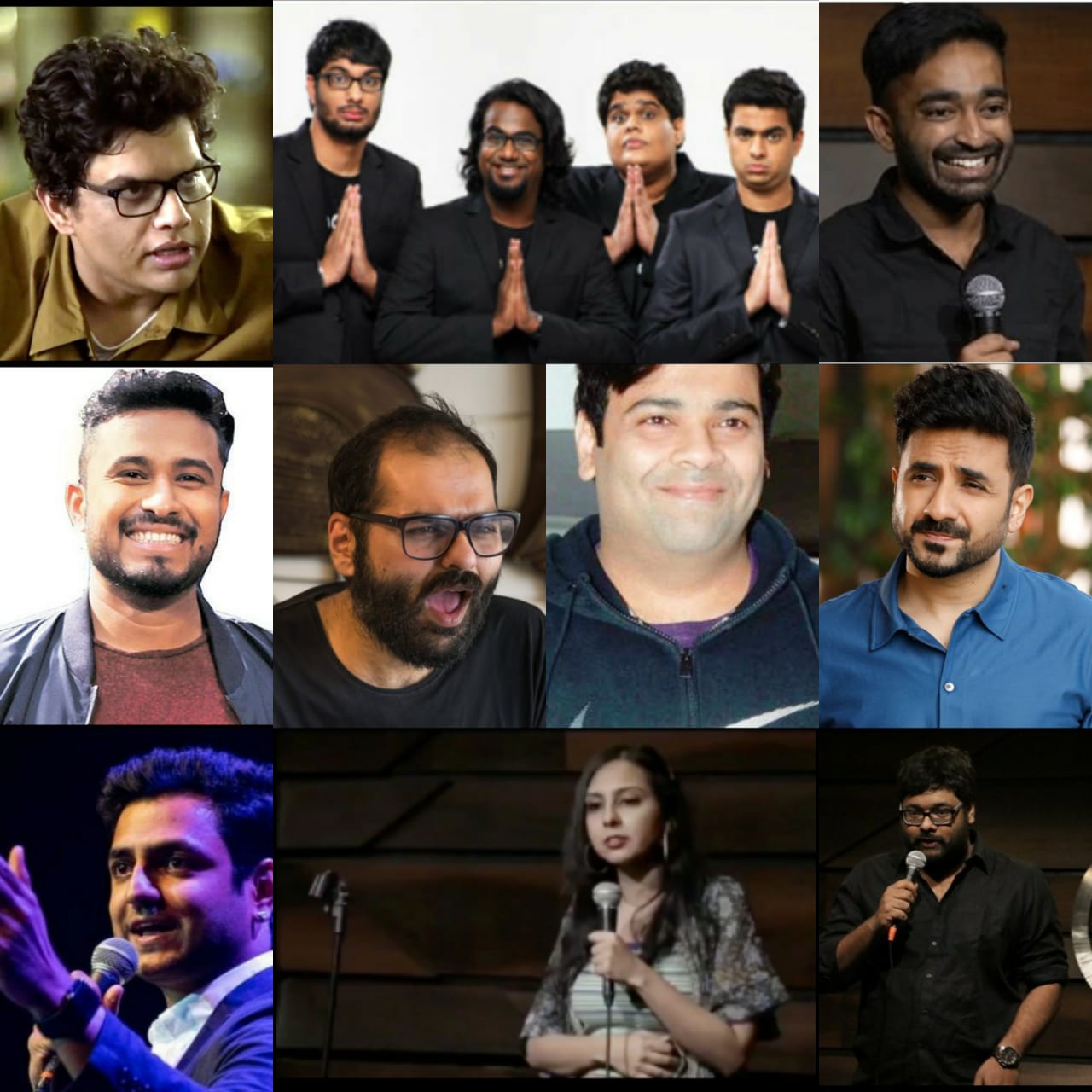 There was a time when comedy meant laughter not offense. Comedians were appreciated for their humor not abused for their words. Social media was used only to post pictures and not threaten people. The internet scenario changed in India in the last decade and various IT cells were formed just to abuse and threaten people who spoke against this group’s beliefs. Stand up comedians have been one of the primary victims of this unruly behavior. Day by day, the situation is growing worse for them.

Let us look at 10 comedians who got into great trouble for their allegedly ‘offensive’ comedy. Were the comedians on the wrong side? You be the judge.

In May 2016, Tanmay Bhat landed upon himself a big controversy when he made a snapchat video of mock conversation between cricketer Sachin Tendulkar and legendary singer Lata Mangeshkar. The conversation was about who the better batsman was – Sachin or Virat Kohli. People immediately took offence as the video involved the characters of the duo verbally abusing each other and making derogatory remarks about old age and death.  The Maharashtra Navanirman Sena and Shiva sena were among the people majorly offended and few of their leaders went on to say that the party workers will thrash Bhatt for his remarks. Effigies of the comedian were burnt across the country and a formal police complaint was also lodged. Many celebrities criticized this video while some took Tanmay’s side saying it was ‘just comedy’.

Matthew was performing an act in National Law university in Delhi, in 2015 when some of his jokes did not go well with the female audience. 15 minutes into the show, a group of women walked out of the auditorium after giving him the finger. Matthew made jokes about domestic violence and ridiculed Mayawati for her looks. The sexist nature of the jokes is said to have made the students uncomfortable. The students then came back with placards which read “Get out, you sexist pig”. Abhish was flustered by the gesture, yet he met with the protestors and apologized to them and said he would not repeat such jokes, ever again.

In the Sirifort auditorium of Delhi, Das was performing as a part of his comedy tour ‘Unbelievablish’. All was going well and funny until, the comic decided to make a joke on our former president Dr APJ Abdul Kalam. His joke in his sketch was about “how Kalam hosts MTV cribs, has swag & defends himself against a fictitious lesbian assault”. An anonymous ‘influential’ man in the crowd took offense of the sketch and called the police. They showed up during the second half of the show and abruptly stopped Das’s show. He later penned a heartfelt letter on social media and defended his joke saying “Yes I can (Talk about Kalam), he was my president too, I’m a citizen and I have rights…one of them includes the freedom to discuss my leaders”. Of course, we all have rights, don’t we? Anyway, a little down the lane, in 2020, Mr Das has asked his peers to stop doing abusive and offensive comedy.

This actor who played the role of Palak on Comedy Nights with Kapil landed in trouble in 2016, when he mimicked Gurmeet Ram Rahim, a saint on the show. His act involved the character dressed as Baba and serving liquor and dancing with girls in a lewd manner. The religious sentiments of the followers of the Baba were hurt and a complaint was lodged against Kiku. He was later arrested and produced before a court in Kaithal which reprimanded him to judicial custody for 14 days. The comedian apologised on social media, but it was too late.

Tanmay Bhat, Ashish Shakya, Rohan Joshi, Gurusimran Khamba, Karan Johar, Arjun Kapoor and Ranveer Singh were the people who faced the wrath of every moral police on the internet and from some of their contemporaries.  When the team did a roast event, for a charity, our country was clearly not ready for it. Even though the whole act was done with the consent of every guest roasted, in good spirit, it was not taken the same way by the netizens or some of the celebrities. The video was later taken down by AIB, but it did not stop there. Numerous police complaints were launched by religious groups, political groups and other small and big organizations who were offended and there was pressure of then CM of Maharashtra, Devendra Fadnavis to take action against the whole group. FIRs were lodged against AIB.

Azadi azadi (references to the JNU protests of 2016) were the first words in the video ‘Patriotism and the Government’, by Kunal Kamra. The intro of the video also had the words “India is a democracy, until you criticise it”. Kamra posted his video on YouTube in March 2017. In the video, the comic mocked demonetisation, Indians attitude towards the army, anti-nationals, and the general nature of the government. The video attracted huge attention, both good and bad, with even Mr Kejriwal tweeting about it. But soon Kamra received death threats on social media. He was added to random WhatsApp groups and was verbally abused and threatened with people implying that they have been tracking him and know his whereabouts. He reported the matter to Cyber cell.

This did not stop Kamra from doing what he believes in. He was recently banned by a bunch of airlines for asking journalist Arnab Goswami, some nation wants to know questions on a flight.

In 2017, this man faced the wrath of MNS for speaking in his act about how two airports and a railway station in Mumbai has been named after Chatrapathi Shivaji. Soon after the gig, he received abuses and threats on social media. In one of the screenshots he posted on facebook of what was supposed to be an online interaction between him and a MNS follower, Ghosh said more derogatory things about Shivaji which did not go well at all with MNS and Shivsena activists. They lodged complaints and demanded for immediate FIR. The comic then apologised in a long message and took down his photos and videos.

This man is a budding comedian. Earlier this year some Hindu communities’ religious sentiments were hurt when the comic compared Hanuman Chalisa to an anti bacterial soap in one of his acts. He immediately received backlash on the internet with many Hindus branding him as Hinduphobic and slamming and flagging his content. A Shivsena member filed a complaint with the cyber cell. Sinha later apologised by saying that he is a Hindu too and he would never come up with another act which will hurt the sentiments of people.

The paavam boy has always refrained himself from doing political comedy as he doesn’t want to be punched for the same. He has usually been away from doing controversial comedy. Now, there are some screenshots on the internet claiming that the comedian is hurling abuses at people on his comments section. He issued a clarification and said that these screenshots are doctored, and he did not do it. Twitter won’t believe you so easily, Kenny! Netizens are now asking Netflix to as susual, boycott, his latest stand up special ‘The most interesting person in the room’.

Since a couple days, you must be well aware of Agrima Joshua. She has been receiving open rape threats for a comedy gig she did in 2019 where she has spoken about the statue of Chatrapathi Shivaji and the discussions about the statue on quora. The video was suddenly discovered a few days ago and people took a lot of offense as it was clearly misinterpreted that she was making fun of the great King, Chatrapathi Shivaji. She immediately apologised for hurting their sentiments. One Shubham Mishra, of bigg boss fame posted a video with several vulgar rape threats hurled at the girl. He was arrested by the Vadodara police last night.

KCET AND COMEDK ARE NOT IMPORTANT THAN THE SAFETY OF STUDENTS