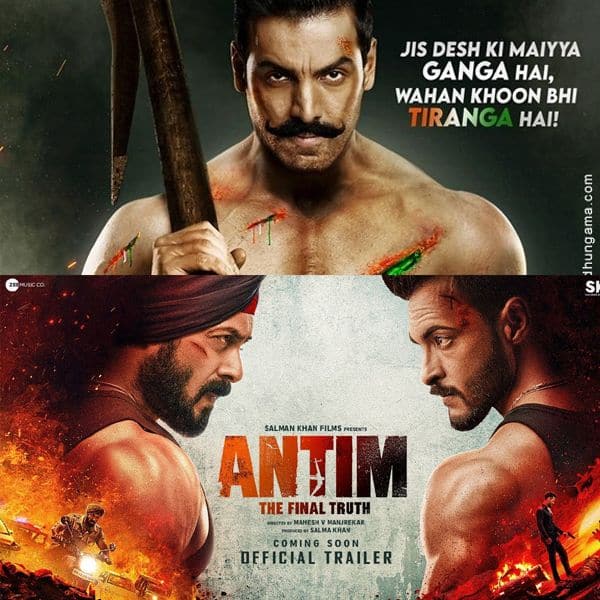 Salman Khan and Aayush Sharma starrer Antim: The Final Truth is set to release in theatres on November 26. The makers made the announcement on Tuesday, along with a motion poster.
With the title track playing in the background, the motion poster gives a peek at the action-packed film that’ll show Salman and Aayush at loggerheads.

According to the makers, Antim: The Final Truth is the journey of a gangster who wants to rise at any cost against a scheming cop who will plot to foil his plans.
Directed by Mahesh V Manjrekar, the film also stars Mahima Makwana. It is produced by Salman Khan and presented by Salman Khan Films.

According to the report, Salman Khan and Aayush Sharma starrer ‘Antim’ will clash with John Abraham’s ‘Satyameva Jayate 2’.
Directed by Milap Zaveri, “Satyameva Jayate 2” was supposed to release on May 13, on the occasion of Eid along with Salman Khan’s Radhe: Your Most Wanted Bhai`. The first part ‘Satyameva Jayate’ revolved around a vigilante who killed corrupt police officers, and an honest officer is called to hunt him down after the body count begins to rise. The sequel’s plot is expected to revolve around the protagonist’s fight against injustice and misuse of power. The film also cast Divya Khosla Kumar, Anup Soni, and Rajeev Pillai. The film is written and directed by Milap Zaveri while Bhushan Kumar, Krishna Kumar’s T-Series and Madhu Bhojwani, Monisha Advani, and Nikhil Advani’s Emmy Entertainment.
Interestingly, Salman essays a Sikh cop in ‘Antim’.

Salman, whose last film Radhe released earlier this year, is seen hosting Bigg Boss 15 on Colors at the moment. His upcoming projects are Kick 2, Tiger 3 and Kabhi Eid Kabhi Diwali. He is also said to be making cameo appearances in Aamir Khan’s Laal Singh Chaddha and Shah Rukh Khan’s Pathan.
John Abraham has multiple projects lined up. The actor, who was last seen in Sardaar Ka Grandson and Mumbai Saga, will soon be featured in Satyameva Jayate. The actor also has a Hindi remake of the famous Malayalam film Ayyappanam Koshiyum in the pipeline. He will star alongside Arjun Kapoor in the film. The actor also has the sequel of the 2015 film Ek Villain co-starring Arjun Kapoor.