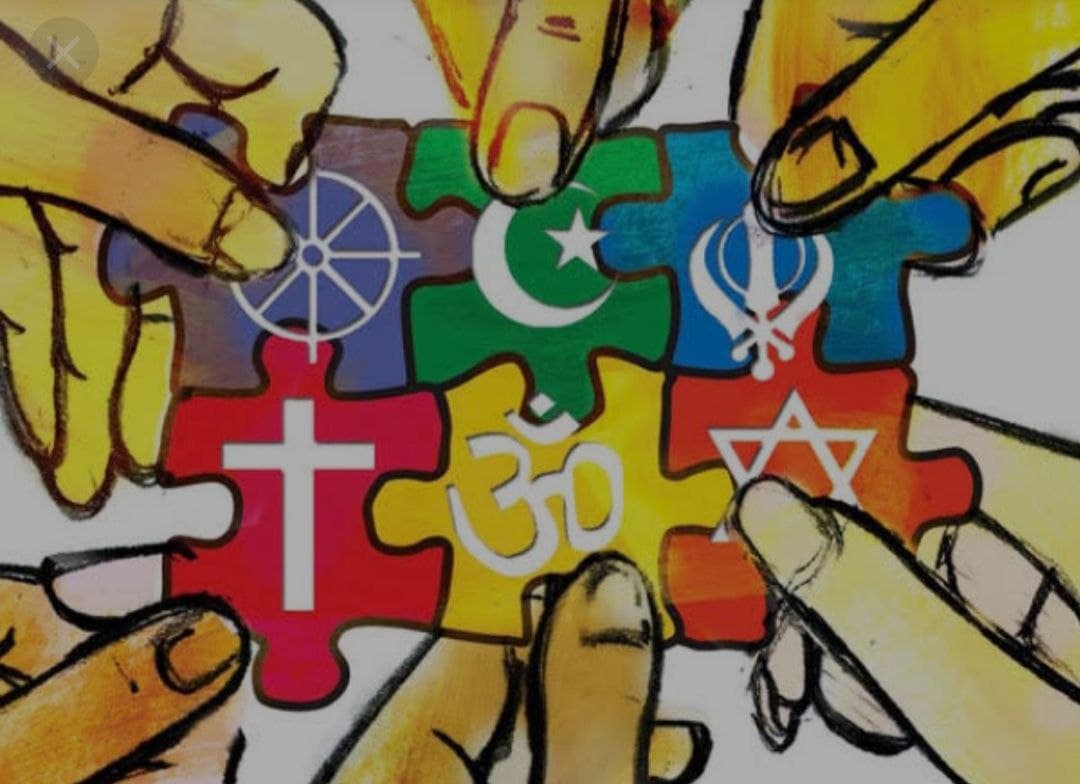 Rising intolerance, extremism, and violence against the other just to prove supremacy. Religion has become a controversial and dangerous subject to discuss, contrary to ancient times where debates were conducted with royal patronage, to examine various religious, philosophical, and moral issues. The knowledge on conducting a successful debate was referred to as “vadavidya” it was from these debates that the Indian tradition of logic and allied investigations (research) were evolved and developed. Considering closer proximity and improved communication, one would assume there would be mutual understanding, education and friendship instead there is misinterpretation to serve one’s narrative, amplification without logical reasoning, misleading masses leading to tension, mistrust, and hate crime among communities.

Religion is morphing into everything that isn’t the essence of it. Religion is supposed to be a source of support and comfort. It is supposed to be personal, enlightening, morale, hopeful, in service of humanity, kind, respectful, compassionate, in solidarity, charitable, non-violent, ethical, impartial, “do as you would be done by” and more all of which relates humanity to supernatural spiritual elements. Embrace of difference – the difference in opinion, in culture, in belief, in way of life – has long been the driving force of human progress.

When we are asked about our opinion on any subject which we are even remotely aware of, irrespective of our actual views we tend to give an idealistic or “woke” answer to fit in the global standards, but when the same question is broken down into many components indirectly to answer the main question, our story falls apart and our actual opinions erupt.

Indians see religious tolerance as a central part of who they are as a nation. Across the major religious groups, most people say it is very important to respect all religions to be “truly Indian.” And tolerance is a religious as well as a civic value: Indians are united in the view that respecting other religions is a very important part of what it means to be a member of their religious community.

All the religions have answered respecting other religions is important and the vast majority of Indians of all major religious backgrounds say that respecting elders is very important to their faith. Is this representation of true opinion or idealistic, as this was a face-to-face interview, which will be revealed by the next set of questions.

All the representatives of the above religions consider themselves very different from other religions, which is completely okay as long as we respect all the other religions and peacefully coexist. The problem arises when one community tries to achieve supremacy over the others by suppressing them or forcefully convert others’ beliefs and religion, of which lately there have been multiple accusations amplified by TV Media giants. This perception of difference is reflected in traditions and habits that maintain the separation of India’s religious groups.

There have been several legal cases against people who have interfaith marriages, either by their own families or religious organizations who could not stand the thought of two adults who have the complete constitutional right and capability to chose their faith and their partner to lead a private life. These cases have caused many marriages and relationships to end unwillingly. Many families have gone as far as to murder the spouses to end the marriage. After the SC and Allahabad HC  judgment, sensing vindication of their campaign against the so-called ‘love jihad‘, Uttar Pradesh Chief Minister Yogi Adityanath and other BJP leaders are now talking about an anti-conversion law for their states, which stands against the constitutional rights of the citizens also recognized as human rights under Article 16 of the Universal Declaration of Human Rights. These families and religious institutions (threatening inter-faith marriages) need to be educated and keep an open mind for the happiness of their children. Inter-faith marriages play an important role in the socio-cultural assimilation of a community and facilitate better integration in society. Centuries-old, gender-biased, religious personal laws, based on morals of different times and spaces, should not influence or dictate our personal choices, our choices should be protected and guided by modern, gender-neutral law.

Indians generally stick to their own religious group when it comes to their friends. Hindus overwhelmingly say that most or all of their close friends are also Hindu. Of course, Hindus make up the majority of the population, and as a result of sheer numbers, may be more likely to interact with fellow Hindus than with people of other religions. But even among Sikhs and Jains, who each form a sliver of the national population, a large majority say their friends come mainly or entirely from their small religious community.

Fewer Indians go so far as to say that their neighborhoods should consist only of people from their own religious groups. Still, many would prefer to keep people of certain religions out of their residential areas or villages. For example, many Hindus (45%) say they are fine with having neighbors of all other religions – be they Muslim, Christian, Sikh, Buddhist, or Jain – but an identical share (45%) say they would not be willing to accept followers of at least one of these groups, including more than one-in-three Hindus (36%) who do not want a Muslim as a neighbor. Among Jains, a majority (61%) say they are unwilling to have neighbors from at least one of these groups, including 54% who would not accept a Muslim neighbor, although nearly all Jains (92%) say they would be willing to accept a Hindu neighbor.

Considering today’s times’ prejudice in people is increasing day by day by hate speech, misinformation, misinterpretation, and amplification of false claims by big-time media houses which might be to please the interests of people in power and attract more government advertisements. There have been many cases of hate crimes within neighborhoods in which convicts ‘felt the need to harm the victims to save their family and neighborhood’ just because of prejudices about the religion of the victim, media trials, and declaration, while there was nothing to be feared of. When companies like Tanishq, Closeup, Surf Excel, and KBC rolled out advertisements promoting communal harmony the companies were attacked, and stores were thrashed after which the advertisements had to be taken down for the safety of employees goes to show us the state of our communal tolerance as a society.

Minister of State for Home Affairs Hansraj Ahir did not report a single case of lynching for the year 2017, and small numbers in earlier years. In July, Ahir affirmed that “The National Crime Records Bureau does not maintain specific data with respect to lynching incidents in the country.” the government and ruling party refuses to acknowledge that incidents of lynching are not ordinary crimes, reflecting normal periodic failures of law and order.

India is a Socialist, Secular and Democratic country with diverse religions, languages, and cultures. The only way out of Intolerance, communal violence, discrimination, and divide is education and awareness of the public, regulation, and reforms in mass media to promote communal harmony as media has a huge influence on the public and is responsible for the public perception to a large extent. Adaptations from the French form of secularism where there is no space for religion in the public sphere, strict laws to curb the use of religion in politics or any reference to it in public address, the judiciary must step in to uphold the secular nature of our constitution whenever it is challenged.