Why we don’t have enough Amphotericin-B in India? 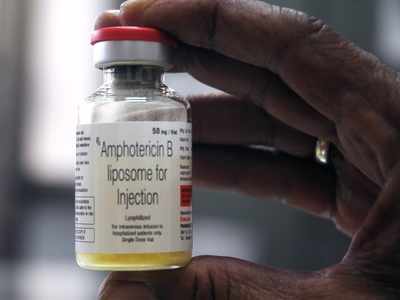 As the second wave of COVID-19 pandemic battered India’s health infrastructure and economic stability, the outbreak of another fungal infection Mucormycosis, commonly known as ‘Black Fungus’, has pushed the country to an even more vulnerable state.

With the shortage of vaccines and other medical supplies persisting, now another worrisome issue has arisen as the country has paucity of anti-fungal drug, Amphotericin-B, which is used to treat people suffering from Mucormycosis.

Over 9,000 have cases of Mucormycosis have been reported so far. With the numbers rising gradually, there is a shortage of liposomal Amphotericin-B, the primary drug used to treat the condition. Several instances of hoarding and black-marketing have been reported, and the Delhi High Court has asked the central government to explain the reasons for the shortage.

Mucormycosis is considered as a rare fungal infection. On May 15, Dr. Randeep Guleria, director of AIIMS and member of India’s COVID-19 Task Force, said several parts of the country were reporting a surge in a supplementary fungal infection known as Covid-Associated Mucormycosis (CAM), which he linked to the “irrational use of steroids” in Covid treatment.

Five days later, the Health Ministry made the infection — popularly known as ‘black fungus’ — notifiable, making it mandatory for states to report suspected and confirmed cases.

According to doctor, treatment has to be quick and aggressive, and early detection is of utmost importance. Treatment is mostly done with anti-fungals and, in some cases, with surgery to scrape off the fungus.

“We start with liposomal Amphotericin injection, and switch to other drugs if that is not available. Amphotericin B deoxycholate is also effective, but it can cause kidney damage. We only use it in young patients with no kidney problems,” Dr Tanu Singhal, infectious diseases expert at Mumbai’s Kokilaben Dhirubhai Ambani Hospital was quoted in a report by The Indian Express.

Why is there a shortage of the anti-fungal drug?

Shortage of the drug that has emerged as the main obstacle in treating Mucormycosis patients. Assuming an average requirement of 100 vials per patient, an estimate calculation would suggest that India requires 9-10 lakh injections of Amphotericin for the 9,000-odd people currently infected. Moreover, numbers are expected to rise remarkably.

One cause that can be attributed to this shortage is that, according to sources, the Centre had devised an allocation plan for various States depending on the number of patients and their condition. This hinders the equal dispensation of the anti-fungal drug.

One black fungus patient requires 4-6 injections per day and treatment lasts four to six weeks. So far, more than 200 deaths due to Mucormycosis have been reported in India. Owing to the rise in cases, the demand for antifungal drugs has increased by 300 per cent.

Production volumes have always been limited because the number of cases has been small. Following “handholding” by the government, all manufacturers were together estimated to produce 1.63 lakh vials of Amphotericin-B in May, the Centre said in a release on May 21.

Another 3.63 lakh vials were in the process of being imported, it said.

Data released by the Centre show that only 67,930 injections of Amphotericin-B have been allotted to the states for the period May 10-31, much less than their requirement.

The Centre has said domestic production will be scaled up to 2.55 lakh vials in June, and another 3.15 lakh vials will be imported, taking total supplies to 5.70 lakh vials.

But it is important to note that the manufacturers can start production only by July, and together provide only 1.11 lakh vials, so the country is likely to remain dependent upon imports.

A shortage of two raw materials has hit the production cycle.

The first is the active pharmaceutical ingredient (API) Amphotericin-B, the major supplier of which is Sarabhai Group-owned Synbiotics Limited.

“Sarabhai can supply 25 kg per month, with that we can manufacture 1.5 lakh-2 lakh injections,” said Dharmesh Shah, chairman and MD of BDR Pharmaceuticals.

Dr. D J Zavar, MD of Kamla Lifesciences, which produces Amphotericin-B on contract for other manufacturers, said the API is the basic ingredient. “It is required for both the liposomal form and plain form,” he said.

The second raw material in short supply is purified synthetic lipids to produce liposomal Amphotericin-B. Lipids are in high demand globally for the manufacture of mRNA vaccines.

Orders placed with Switzerland-based Lipoid in December are being shipped now, manufacturers said. In India, the only lipid supplier is Mumbai-based VAV Life Sciences. Its monthly capacity is 21 kg, which the company plans to increase to 65 kg by August, MD Arun Kedia said.

Even if the raw materials are available, production of the drug takes around 21 days, besides the time taken for the sterility test.

Waste unmasked: How Covid-19 has affected the environment